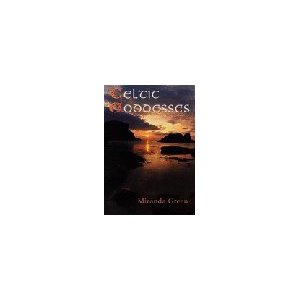 Celtic Goddesses; Warriors, Virgins and Mothers.
blz. 224
Britisch Museum Press
1995
Celtic goddesses presided over war, nature, animals, healing and fertility. Terrifying battle goddesses were often invoked in times of war; a Mother Goddess was venerated, often in triple form, and supplicated for fertility of animals and crops. Divine and semi-divine females abound in Welsh and Irish myths, often associated with themes of virginity and sexuality, promiscuity and destruction. The concept of partnership is prominent in Celtic religion and myth, and it is possible to trace evidence of the divine marriage in both European iconography and Irish story. Goddesses were often linked with animals: birds, bears, pigs, snakes and horses all had their divine protectresses.