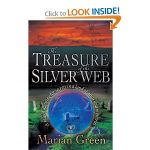 A tale of questing for secrets in a land of mists and mysteries.
Magic is a subject which fascinates many people, both young and old. Popular books may have drawn it to the attention of a new generation, yet magical tales of quest and mysteries, of symbols and discoveries seem to go back through human history. The Treasure of the Silver Web is the story of friendship, discovery and magic set in the simpler times of the pre-computer age. It reveals secrets of the countryside the gifts of nature as well as describing magical arts and methods still used today. Readers will have to decide for themselves where the facts stop and fiction begins. Marian Green is well known for her many books on folklore, occult philosophy, modern magic and witchcraft so her approach to these matters, even in a story book setting, are based on many years of practical experience and study.